RLSH (n): Real-Life Superhero.  An alter-ego used to anonymously interact with the world and serve a higher ideal.

There are plenty of RLSHs in the world today.

The World Superhero Registry and Real Life Superheroes.org both keep tally of who is active.

Is an RLSH a crime-fighter?

Many RLSHs consider crime-fighting to be a defining characteristic of superheroes.

As Danger Man, I consider jumping between buildings to be less risky than confronting strangers with criminal records, but more representative of what makes a hero…super. 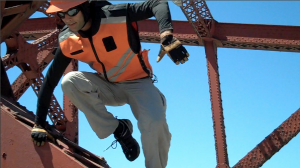 I am not a crime fighter.  My city is safe, the police are better trained and equipped to deal with crime, and I haven’t found much evidence that being an RLSH aids in stopping crime any more than a citizens patrol.

The debate continues as this new RLSH community struggles to define itself: what makes a hero?